One evening, 18-year-old Lars anxiously came to my tent, and without notice, he pulled out a jack knife and held it to my throat. “I want to go home. Get me an airline ticket now, or I’ll cut you and take the money myself.” The event happened on a trip to Spain with a group of high-risk youth. During my teacher training I had taken a course or two on classroom management but had never learned to handle a situation like this. I had no understanding of or experience in listening to the turmoil of a young person’s inner world. Lars and I had had talked several times, and I knew he often tried to drown his pain in alcohol, which he affectionately called “my pain killer.” I had learned to talk with kids when they “acted out” rather than trying to control them.  In this situation, it was clear that Lars felt desperate. In the present moment, he certainly had the upper hand. With the knife to my throat, I thought about what to do next. I did not know if Lars had been drinking, and I decided not to reason with him. Attempting to sound assertive, but with a shivering voice, I said, “Lars, put the knife down.” He became more fidgety and held the knife closer to my throat. Obviously, that was not what I had hoped for. “What are you going to do? Stab me with that knife? You can certainly do that. I am sorry I have not paid attention to you wanting to go home. If I had, you would not have put a knife to my throat to make your point.” As I acknowledged his goal, I noticed he relaxed a bit and continued, “You know, my job is to work with you so you can go home. You really want to go home right now, don’t you?”

“Do you know how to get to the airport to buy a ticket? … If you stab me and take the money, the other group members will be stuck. If you were one of them, would you like to be stuck in Spain without money and with your teacher-counselor stabbed?”

“Why don’t you put the knife down? That would make it a bit easier for us to talk.” As soon as I said this Lars pushed the knife harder against my throat. I continued, “You know, there is a chance I can help you figure out how to get back home without having a felony on your record. If you hurt me, you may also get to go home, but I’m not sure about that.”

“They may catch you and try you for the incident here in Spain… I don’t know how they treat prisoners here in Spain. What do you think?”

“I’m not going to prison here in Spain, that’s for sure!”

“Listen,” I said, “I think your chances of going home are much better if I help you.”

To my surprise, Lars put the knife down but not away. I spent the rest of the night listening to him talk about his life and how he had started drinking at the age of 8. He said his parents and others told him he had a drinking problem, but he always denied it. I listened and asked questions to help him make sense out of his situation. As the night progressed, Lars concluded that alcohol controlled his life. When he asked if I could help him conquer his alcohol problem, I answered that I didn’t know anything about alcohol treatment, “but I am hopeful you can beat the alcohol—you know, nothing will ever stay the same.”

The next morning, I called Lars’ social worker to arrange for his return to Denmark to enroll in a detoxification program. As he said goodbye, his eyes filled with tears, and he thanked me for listening. I never thought about asking him to give me the knife.

When I returned to Denmark a few months later with the other youth, I contacted Lars’ parents to hear how he was doing. They told me that as soon as Lars had gotten off the plane in Copenhagen, he had robbed a storekeeper at knifepoint and gone on binge until he was caught. He had been sentenced to seven years in prison.

The Power of Just Being with Kids

On that evening in Spain, I had no idea that I had my first experience with creating healing presence. I knew I had done something that worked in the moment. I had created a space where Lars realized he needed help with his alcohol problem. This first lesson sent me on a path to explore the conditions that are essential to creating healing presence—a space where kids in psychological or spiritual crises feel safe, respected, and encouraged to find their inner strengths to cope with their pain. 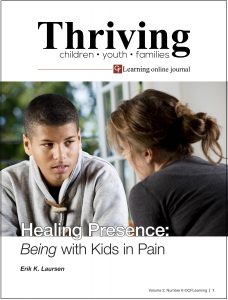 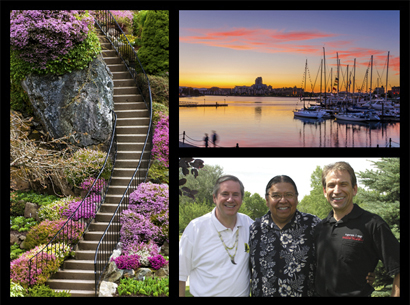 April 22-26, 2017, Victoria, BC
Network with leading-edge presenters and like-minded colleagues. Beneficial for all who work in prevention, treatment, and education with challenging children and youth. cflearning.org/victoria-seminars